According to traditional Chinese medicine theory, there are over 1000 acupuncture points on the body, each lying on an invisible energy channel, or “meridian.” Each meridian is associated with a different organ system. 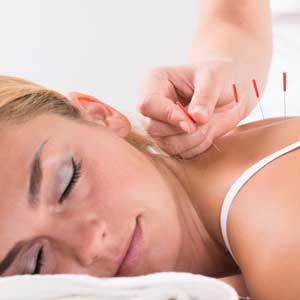 Acupuncture is a traditional Chinese medicine (TCM) practice that originated thousands of years ago. It is based on the premise that a blockage or disturbance in the flow of the body’s life energy, or “qi,” can cause health issues. Acupuncturists insert hair-thin needles to specific acupuncture points throughout the body to restore the flow of qi, balance the body’s energy, stimulate healing and promote relaxation.

Acupuncture is said to be useful in addressing a variety of health conditions, including:

Some people use acupuncture to promote fertility. It is also used to quit smoking and as a component of the treatment for other addictions.

Typically, an acupuncture will use six to 15 tiny needles per treatment (the number of needles doesn’t indicate the intensity of the treatment). The needles are often left in for 10 to 20 minutes. The acupuncturist may twist the needles for added effect.

Your acupuncturist may use additional techniques during your session including:

Cupping. Glass cups are applied to the skin so that there is a suction effect. In TCM theory, cupping is used to relieve stagnation of qi and blood.

Herbs. Chinese herbs may be given in the form of teas, pills, and capsules.

Laser acupuncture. Said to stimulate acupuncture points without the use of needles.

Keep up on all that is happening at Essential Balance!